But there was one film that was able to combine the life and passion of a star and the real Palm Springs life and style in a unique way!

Sinatra in Palm Springs – The Place he called Home!

A documentary film by Leo Zahn, explores Frank Sinatra’s deep attachment to Palm Springs and the Coachella Valley, his primary home for almost 50 years. The film captures the spirit of the Sinatra era and pays tribute to the unique lifestyle of Sinatra’s Palm Springs and Rancho Mirage.

Steeped in affection and appreciation for the deep bond between Sinatra and these beguiling desert towns, “Sinatra in Palm Springs” tells the story of a man whose generosity and compassion for his fellow citizens had no bounds. He loved the desert and its people. He loved the local restaurants and bars. His best friends lived nearby. Revealing interviews bring to life a bygone era . . . beginning with the post WWII years and Sinatra’s 1947 home in Palm Springs, tumultuous times with Ava Gardner, his 1954 move to Cathedral City/Rancho Mirage, his marriage to Barbara, and life at the “compound”.

More than 50 clips from his movies and television appearances bring to life the Sinatra of legend during the Palm Springs years. Major sequences are dedicated to historic restaurants Sinatra frequented for decades. Featuring interviews with Barbara Sinatra, Mel Haber, Tom Dreesen, Nelda Linsk, Bruce Fessier, Trini Lopez, Michael Fletcher and many others who knew and lived and played with Frank Sinatra. 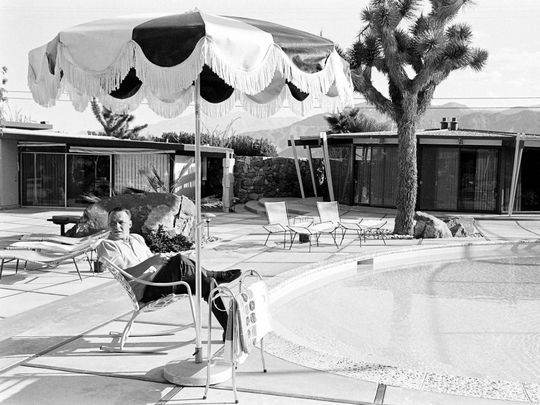 We have never seen another film that touched us in so many different ways!  The spirit of Palm Springs, the life of Frank Sinatra, all the stories … This film draws a picture and triggers a feeling of Palm Springs that we really experience during our yearly visit!

Back in Europe we wrote some lines to Mr. Leo Zahn, director of this fantastic documentary but unfortunately there was no chance to get a copy or another chance to watch the film with friends and colleagues – until now!

A couple of weeks ago I searched the website for some news or updates and finally found THE LINK! Yes, you can rent “Sinatra in Palm Springs” worldwide now and we absolutely recommend it to everyone! This is the best documentary ever seen, not just from an architect’s point of view (or a Sinatra fan)!