Remember the building we’ve seen next to Udine a couple of days ago? In the meantime we found out the history and the architect behind it.

ANGELO MANGIAROTTI was born in Milan on 26th of February 1921. He graduated in architecture in 1948 at Milano’s Politecnico. In 1953 and 1954 he works in the United States, participating also to the competition for the Chicago “LOOP” and works as a visiting professor at the Institute of Design of the Illinois Institute of Technology in Chicago. While living abroad he met Frank Lloyd Wright, Walter Gropius, Mies van der Rohe and Konrad Wachsmann. Back in Italy, he opened an architectural firm together with Bruno Morassutti until 1960. His studies were mostly on the problems of prefabrication. 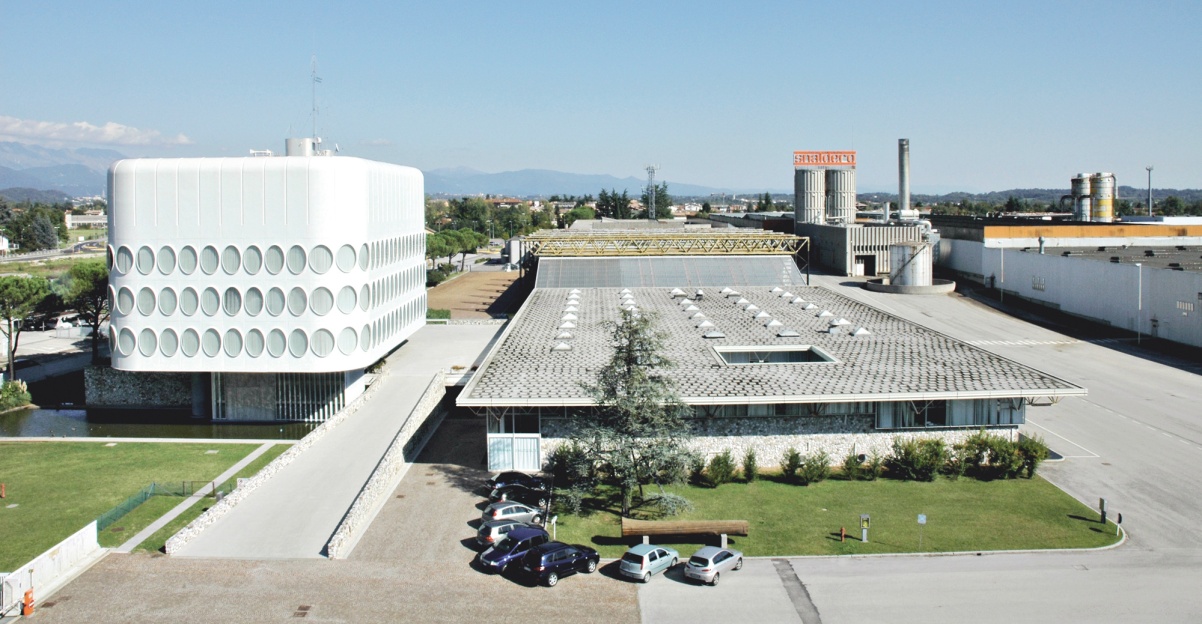 In 1973 Snaidero decided to enlarge the factory in Majano.
The building covered an area of one hundred thousand square metres, all completely roofed: departments, stores, canteen and social services area. One thousand three hundred persons worked in it; and at the same time new offices were opened in Paris, London and Zurich.

“Founding this company was my act of rebellion against the poverty of my region which forced people to cross the frontiers and look for jobs in other countries. Maybe my reaction against the past social conditions is the secret of this company.” In 1975 Rino Snaidero commissioned Angelo Mangiarotti to design the office complex.

The forward-looking industrialist and the famous architect of Milan soon got on well together. Mangiarotti decided on a structure which “is to be understood through the four supporting piers with circular sections, made of ferroconcrete.

The roofing is of crossed beams from which descend the tie beams on which the floor is hung, with a five-metre opening in the long side, and seven in the others. The wide central, empty space has an excellent spatial distribution, but must be understood as a consequence of the building process adopted. The front panels aren’t bearing, of course, and because of the construction material and perforated treatment, it recalls a huge drape.”

Rino Snaidero wanted to keep in contact with Angelo Mangiarotti. So the architect designed Cruscotto, the prototype of which was shown at the MoMA of New York.

Angelo Mangiarotti has been one of the most estimated figures of fine design in Milan.